I’ve been breastfeeding the girls since they were born. I am able to do it and I feel lucky that I can do it.

It’s not easy and it can be stressful at the beginning. But I can guarantee that it’s worth it.
The first few weeks I was afraid that the girls will not have enough food especially during the third week because they didn’t gain enough wait. The midwife wasn’t worried but she really wanted to look closely so I had to see her the following week.
Luckily they gained enough weight and after 4 weeks we were on track.
I’m breastfeeding on demand and it’s kind of a major commitment.

So what is breastfeeding on demand? To me it’s giving food when the girls want it and mine want food every two hours…
Remember when I said that I breastfeed every two hours it’s not really true! We count the time as soon as they start to eat and not when they finish to eat! So really in reality they eat every1h30!
I wish they eat every 3-4 hours but it’s not the case!!  In one way it is good… more there is demand, more there is supply!!!
They sleep now (at 14 weeks) 5-6 hours at night so I can’t really complain! The only thing is from 7pm to 12-1am! After it varies between 2-3 hours.

Why did I choose to breastfeed?

First it’s free and doesn’t take time to prepare it! I just have to take one or two girls and open my bra! It’s sterilized and just right temperature! I can’t burn my girls with it!!!
If I had to use formula I will have to anticipate and prepare their bottles!
When I finish breastfeeding I just have to put back my bra and it’s done!! If I was giving formula I will have to wash the bottles and sterilize them… It’s a lot of time that I don’t really have! And I prefer to use the time I have to play with the girls!

Breastfeeding has a lot of benefits that formula can’t give:
– It reduce the risk to get breast cancer and uterus cancer.
– I can give the girls some antibodies that protect them from getting very sick. Unfortunately they will still get sick but they will recover quicker.
– Breast milk reduces ears infection and respiratory infection.
– Breast milk changes it’s composition in function of the girls needs.
– The girls eat what I eat so the milk has different taste every day! I hope they will like broccoli! For sure they will like chocolate as I eat a lot of it!!!!
– The poo poo doesn’t smell strong as with formula!
– Breastfeeding helps bonding with them but I think you can still bond with bottle.

How do I do it with two babies?
I am either tandem with them or one on one. I do more often one on one.
I don’t really like tandem feeding. Why? Because I feel I am a cow! You are laughing but it’s true! Also the position they are in! I have to use the pillow and use the football position. It’s not very comfortable! I never liked it with Mateo so with two girls I like it even less but sometimes I have to do it! Tandem feeding gains me some time! In 12-15 minutes it’s done but with one on one it’s double time! So tandem has its advantages!

There are different positions but they are not easy… Maybe when they are older it’s easier for some other positions.
What I like with one on one is that I can look at them easier and I can look at them in the eyes! They smile at me and that is so cute!!! We can interact a little better.

When do I tandem them? When they are both starving at the same time and when I put them to bed! At night, I usually do one on one as they don’t wake up at the same time. If they wake up together I take both at once! It saves some time and I have more sleep.When I feed them one on one at night sometimes I fall asleep with her!
You are going to ask yourself, why doesn’t she wake up the second girl and feed them together? I did it for a while but I noticed that she wasn’t really eating. She was more using my nipple as pacifier so she will wake up 1 hour later asking for food! When I don’t wake them up they can sleep 2-3 hours more… But sometimes just 1 h our… It’s also more difficult at night to feed two babies at once! Why? Because when they are done, I have to put one on the bed and take one to the crib and take the one in the bed and transfer her in the crib. It’s a lot of movement that wakes up everybody! When I do one on one, she and I can be half asleep when I put her down so everybody sleeps back fast!
So I breastfeed mostly one on one.

I feel lucky that I can breastfeed them. A lot of twin mommies can’t breastfeed their babies 100%. They have to do breast milk and formula at the same time. Others do only formula as they couldn’t produce enough supply. Or for some it is also by choice.
I also feel lucky because I didn’t have to pump to get my milk supply up. Some moms have to pump to have enough milk.
I feel lucky because my girls didn’t go to NICU so I had no interference for breastfeeding.
I feel lucky because both girls latched very well since birth. I didn’t have any problem at all. Some babies don’t latch very well and some moms lose confidence in themselves because of that.
I think it’s a process and can take time. (Mateo didn’t latch properly on day one!) The breastfeeding class said it can take 6-8 weeks to get working so moms who want to breastfeed their babies, stay strong and keep trying, it will be working very fast!

At the beginning we say you can breastfeed until 12 times a day but for me I can say I breastfeed 24 times and sometimes more than that for a day!
I felt like the first 6-10 weeks was doing just that but now I have a little more time… I still breastfeed between 16-20 times a day! Remember I do mostly one on one feeds so it’s multiplied by 2! But it’s quick… 10-12 minutes each! Oh, if you calculate I breastfeed 4 plain hours a day in average!! So I have 20 hours left!!! Lol!
My only concern with breastfeeding is that it takes a lot of energy. So sometimes it’s a little difficult because of sleep deprivation. Eating is very important and eating right. I lost all my pregnancy weight in less than a few weeks. But I was and I am still eating like crazy. I’m eating for 2-3 people… Breakfast lunch dinner and 5 or 6 snacks. Drinking water is also important. I’m drinking 3-4 liters a day.

Voila good luck ladies who choose to breastfeed. It’s a good moment that you will not regret. But don’t push yourself and don’t feel guilty
if you have difficulty or it doesn’t go how you want. Take your time and take is slowly. One day to one day even hour by hour (especially for the first few weeks). 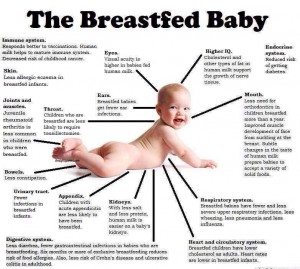