Maeva and Miya are 6 months old 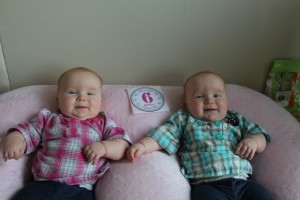 Every month I say the same thing but I don’t see the time going… I feel like it was yesterday they were born but it’s been half a year already… Can you believe it? Half a year!!! I cannot believe it myself!!

These girls are good even though they get very fussy lately! You know I think they are kind of frustrated and bored!! When they are awake on the floor, they lie down, tummy time and playing with small toys (it’s more which toys can go in the mouth!, actually all toys go in the mouth!!). If I’m 100% with them, there is no fussiness anymore! But it’s difficult to give 100% attention! I need to pee, or eat or take a shower!!)
Actually for the shower they are not fussy! I put them in our bedroom between two mirrors and they love it!!!

This month was a big learning month. They learnt to seat and they are almost unassisted now. I always put something behind them in case but they are getting very good at it!!

Yesterday they were both sitting with my big pillow behind them and Mateo was playing with them! They were all smiling like crazy! It’s so nice to see all three bonding like that!! I wish it will be like this for ever!!

The separation in the crib is not working so well. Poor Maeva, I think she has separation anxiety with her sister! She rarely criew at bedtime but now it’s super difficult to put her in bed. I think it’s more difficult for her because we separated her from her sister and she is sleeping in an other crib! I wish I could attach both crib together. But it’s not possible unfortunately ;(

Miya is ok. She still has difficulty to fall asleep but she doesn’t wake up as much as her sister.
Overall, they are both sleeping better. They only wake up once to twice during the night! They are doing better and better. Often at 5am, they wake up so either Andrew takes one to snooze on the sofa or I am able to put them both together and they fall asleep back after a little chat!!!

My girls hands are more and more in control. They can pull an object towards them. They grab a toy and practise moving objects from one hand to the other. Very interesting! They are starting to understand the concept of cause and effect. Poor me!! I will have to pick up the toy that falls down!!!!
They don’t eat their feet yet but when I show them how to do it, they both laugh!! 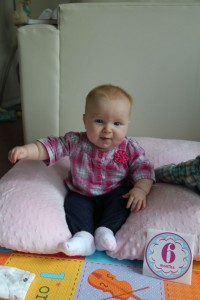 My pediatrician suggested to start immediately solid food at night. Hmm… solid food but I’m not sure they are very interested yet… They are looking but no more than that…
And at night?! I’m kind of afraid of food allergies so at night I could not see it automatically.
So I decide to start solid as his recommendation but I will start at lunch time for few days and then move to nights. (I will do that for each new food.) He said it will help them to sleep longer at night! I will write you soon about the introduction of solid food! I can tell you in advance it is interesting! But I will not say more otherwise you will not have the surprise!!!

At night we had a routine but it’s not working properly anymore so we are going to try something else!
Yesterday I did something different and they went to sleep with no problem. I’m going to see if it works tonight! I will write a new post about it later!!  Hmmm, I have to write a lot of things now!!!

Voila, my girls at 6 months seem happy and they are healthy.

I’m very proud mom of twins! I love my three kids so much. They bring me different feelings (good feelings and sometimes strange feelings!) every day, every minute but it’s worth it!!!
I am very happy with my boy and girls. It’s a lot of work but again it’s worth it!
The hugs, the smiles and laughs they give in exchange it’s so good!! And watching them growing up like that, it’s again and again worth it.