Sharing toys ha ha ha funny!!!My girls are just 6.5 months old and I can see already the future fights over toys!!I can now understand why some parents of twins buy exactly the same toys… To avoid a fight!!!

So this morning, I put the girls sitting in front of each other. I like it because they can interact together! They look at each other and smile, touch each other and even bla bla something. It’s very cute to watch.So this morning I introduced the cups. I gave one to Maeva and one to Miya!They were acting the same. They were looking to each others cup and wanted the other one!It wasn’t more Maeva or more Miya. It was both of them… So I will have to teach how to share very quickly… I already told them but I don’t think they understand yet!!! 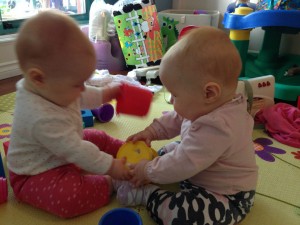 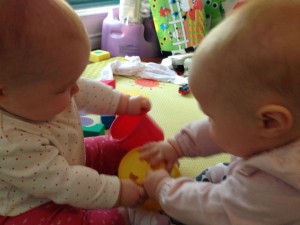 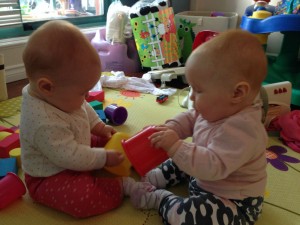 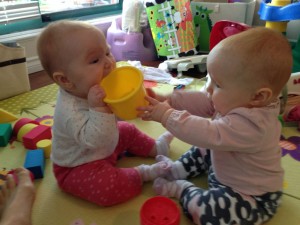 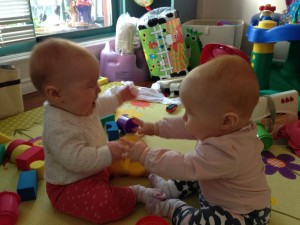 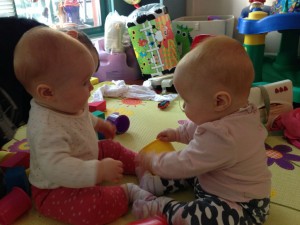 Now I can see myself buying double toys! If it can avoid fight over fight I am for it!!! I don’t really want to be behind them 24 hours!!!Before having these girls, I never really understand why double the toys but I think it make sense now!!Actually I think we will do both!!Some toys in double to avoid fights and some single toys to learn how to share!!!I don’t really see myself being the mediator for toys all day long!!! So 1/2 toys will be identical and 1/2 toys single!!The thing with that is which one  is going to be double and which one will be single… That is now the real question!!!!Due to lack of space, everything big will be automatically single (that resolves a part of my problem!!!). I will have to make sure they play together or alternate!For the rest, I think we will have to see!! Maybe we will have same toys but different color! It could work if both have different color preference!!Ha ha ha I’m laughing!! With the singleton, you will never have this kind of existential question!! I really hope my girls will be able to share without fighting too much!