I am sure that people who have twins know very well the difference but others I am not sure!

We heard so many funny things about twins, that sometimes it makes us laugh loudly!!

Most people are familiar with fraternal and identical terms but it should be more accurate if we say there are two types of multiples:

Dizygotic twins (= fraternal) and Monozygotic twins (= identical)
1.  Dizygotic Twins
It is generally happening when the ovaries release two eggs and both eggs are fertilized by sperm (2 in this case). they are each formed from a separate egg and a separate sperm. If both zygotes implant in the uterus, you’ve got twins.. if the mother release 3 eggs and they are fertilized by sperm, you will get triplets and so on! Some women have a genetic tendency to hyper-ovulate, some is due to hormonal fluctuations (sometimes due to medication, such as birth control or fertility medications).
2. Monozygotic Twins
Monozygotic twins form when a single fertilized egg splits in two.
There is only one sperm this time! Nobody knows what causes an egg to split but it is definitely not hereditary! It is random. It remains one of the magical mysteries in life!
They are automatically the same genders, and they share the same placenta.
Depending on when the egg (zygote) splits, they may share an amniotic sac, or they may each have their own personal space and membranes.

3. Semi-identical Twins
Semi-identical twins is when an egg splits and it is fertilized by two sperms! This type of twins share about 75% of their genotypes (50% from mother and 25% from dad). In theory, they will be more similar in appearance but they are not completely monozygotic. This kind of twins are name body polar twins. I will not go further because I am not sure about… I think it is even more complicated that I just wrote!
People make us laugh. Yesterday, we were saying that we are going to have twins and they answered by looking at Andrew… “Man, you are good!” lol!!! We laugh because this time it is Mommy is the best one!! ha ha ha!!!!
Or it is funny also when they speak about hereditary!
People ask if we have twins in the family (it is only from Dizygotic type of twins) but people believed it can come from Mom side and Dad side! Here is what is not true! It can’t be come from Dad side. Hereditary will come only from the Mom side because the Mom is hyper-ovulating. Dad can pass the genes down to a daughter and increase her chance of having twins but not to a son.
Often they ask me “Do you have twins in your family?” and I say “No”, they get confused so they ask me if Andrew has twins in his family” and I answer “yes” because it is true. So I can see the face changing and saying ha it comes from that!!
So sometimes, I said there is no correlation with Andrew and our twins! But they get confused and don’t like it so they are happy if we stop speaking right away!!! Even I think it is constructive!!!!

Also sometimes, I am wondering if they are thinking we had difficulty to have kids (even we had one already) and we used medications! Actually, one person asked me kind of directly if it was natural! I said yes but I said Yes just by sex!” Even this person was not convinced!!!
So for the majority of people twins come from either hereditary, or medications! From their point of view, it can’t be random!
So if I start to say our twins are monozygotic twins, they open their big eyes and think… what she is speaking. So if I say they are identical and it is a random miraculous thing that happened that is not possible at all from their eyes and they think I am crazy and I do not know what I am speaking about!

Voila, so in conclusion there are mainly 2 types of twins: fraternal (dizygotic) and identical (monozygotic)

and mine are monozygotic Twins, so identical and there not come neither from hereditary, nor from medications! We were just lucky!!

Maeva and Miya are one month old

Maeva and Miya are one month old

Maeva and Miya are 2 weeks old

Maeva and Miya are 2 weeks old 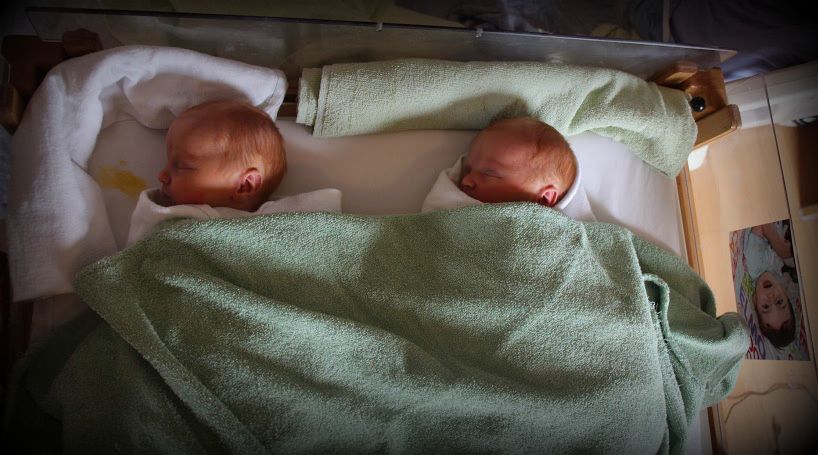